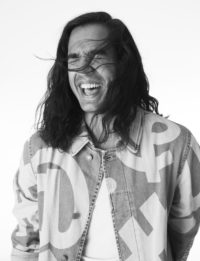 Q: How would it have impacted you as a younger person to have been represented in the media and in society?

Nathaniel: I think that any child needs to see a version of themselves that they can relate to, whether that’s prospective or something that they can see in themselves at the time. I think that, as a young half-Indian, half-English queer man, you didn’t see an awful lot of that in the 90s or the early 00s, especially in a positive light. You often saw Asian people represented as the nerds or someone who was so introverted, and then you saw queer people as the joke, very flamboyant, normally. Had I seen this version of myself who is masculine but still queer man with long hair, I think that it would have been a little less lonely. Where I grew up, there weren’t many children especially of Indian heritage apart from me and my family. Everyone else could else see people they could relate to on screen, in literature, on TV, everywhere, I couldn’t. And so it’s only now, having grown up, that I can see more of that, which is really positive and I think it’s really important that children see someone that they can see themselves in and someone they can aspire to be.

Q: What do you think is the importance of community and representation in bringing about political and societal change?

Nathaniel: To have spent so long in history being persecuted, being ostracized, being just not seen as part of the general community, that we are community unto ourselves, I think that it’s important that the integration shows that it doesn’t matter who you love, what you look like, or how you identify, you’re still a person with rights and opinions and they’re all valid. And I think if we are going to make a change, and by god, change is needed, it’s got to be together. You can’t do it on your own, there is strength in numbers. It’s not about raising an army, it’s about building a community in which everyone feels loved, represented, seen, heard, and where you feel like you can make a change. It’s not good enough to have people, especially younger people, thinking that they can’t do anything despite the fact that they want things to be different because they are seen as other. You want people to have the strength to rally together and to make the world a better place and it’s not going to be done with small voices, it’s going to be done with those who have fought, those who are fighting, and those who are doing it in a way that is done with love.