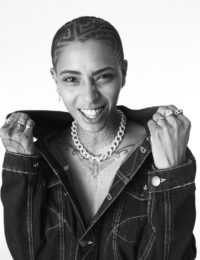 Q: Do you currently feel represented in the media and in the world around you?

Roxanne: Honestly, no I don’t feel represented in the media or around me. I think that’s why I’m so visible. Yes, we celebrate gay men now, but I think we forget about masculine women. In society, if you’re not feminine, if you’re not girly, if you haven’t got long hair, then you’re not deemed beautiful. By the look of me, you can see I totally rebel against all of that. I think it’s really important for the little Roxanne’s – if I was growing up and saw someone like me, I think I would’ve found myself a lot sooner than I did.

Q: How did your faith interact with your identity and how did you marry the two?

Roxanne: I grew up as a Catholic, and just a couple of months ago the Pope and the bishops had a gathering and they all voted against bringing gay marriage into the Church, and for me, it was really upsetting because I was religious before I found out my sexuality. From a young age, I went to Catholic schools, I was 5 years old doing confirmation. At the moment, I just feel like I’m a free spirit, just flowing. It’s a shame that there isn’t a queer religion.