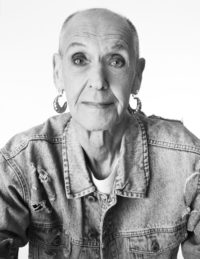 Q: Do you currently feel represented in the media and society at large?

Stuart: Well, no is the short answer to that one. I think where we are underrepresented at the moment, in fact we are not visible at all, is in care homes. One of my colleagues’ lover has had to be put into a care home and has been attacked by care workers on a number of occasions. So, we are going to mount a campaign and draw attention to what’s happening. We’ve found, historically, a number of other cases already and now we are going to spread the word in our community. The Council had to move his spouse to another care home, and they are taking some kind of responsibility. Nothing has been finalised yet, except that he can’t talk openly about it because it’s under review. And they might even be asking for a non-disclosure agreement, which is horrible because he can’t talk about the man he loves to anybody else – it’s disgusting, really.

Q: What changes would you like to see for the queer community, especially in representation, but also more generally, in the next 10-15 years?

Stuart: I’d like our media to get to grips with […] how vulnerable our situation is, how vulnerable the things that we have achieved are, and how there are clear attacks on particularly trans people by the LGB Alliance, with their money from Christian fundamentalists in America, who just are pushing the politics of hate on trans people and drumming up isolated cases that involve one person and making them into an issue that affect all people.

Q: What was your most memorable rally from your earlier days of organising?

Stuart Feather: There are so many! But it was one in the Methodist Central Hall when we were protesting against those who were attacking gay people and wanted to re-criminalise us, as well as abortion, and impose stronger laws against prostitution. We managed to get tickets to their inaugural meeting at the Westminster Central Hall. Malcolm Muggeridge had taken the stand and suddenly this voice from high up in the balcony cried out, “Ours have been saved! Ours have seen the face of the Lord! Hallelujah, hallelujah!” The whole place fell silent, and you just knew for a moment that everyone believed that. And then it slowly dawned on them that it was another interruption by the Gay Liberation Front. The stewards ran down to the centre and waited for this drag queen to come down the stairs and try and run away from them, but they came down to the front of the balcony and did it all over again. The stewards had to chase him round the balcony and grab him to throw him out of the chapel. It was so real for a moment that I’ll never forget it.