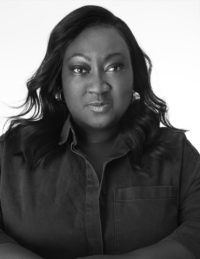 Q: If you had been represented growing up, which no doubt you weren’t, do you think your life would have been any different?

Lady Phyll: Yes, I think that representation and positive representation really matters. Everyone wants a sense of belonging, a sense of seeing themselves or people who are like them – whether you’re black, brown, LGBTQ+, whether you’re working-class, whatever it may be – if you do not see that, you end up feeling quite isolated and in a sort of soul-destroying dark place [of thinking] that you’re alone. Growing up, I would’ve loved to have seen more visibility, more representation, but also people speaking truth to power unapologetically.

Q: What changes would you like to see for the queer community, especially in representation, but also more generally, in the next 10-15 years?

Lady Phyll: I would like to see access to healthcare, especially for the Black and Brown communities, which happen to be LGBTQ+. We are overrepresented when it comes to over-medicating, but we are underrepresented when it comes to real support, for e.g. in accessing therapy [we need an awareness of the fact that] different languages are spoken. I think it links back to the campaign you are running, Stuart, around safety in healthcare and homes. I’d also like to see the school curriculum change. Of course, it’s changed a lot, but this kind of conversation that Stuart and I are having, this is an inter-generational conversation that is so rich that needs to also be taught in schools so that young children know that we are [normalising] the conversation that LGBTQ+ people in the world belong and that we shouldn’t have to fight for spaces. I’d say, lastly, that I would like to see an eradication of rampant racism within our own LGBTQ+ community. That is just so prevalent, it exists, it’s there, and we’re not doing enough to address it. I guess UK Black Pride is, but we need more collaboration, unity, and consistency in our voice and agency – we need the legitimacy to speak openly about it.